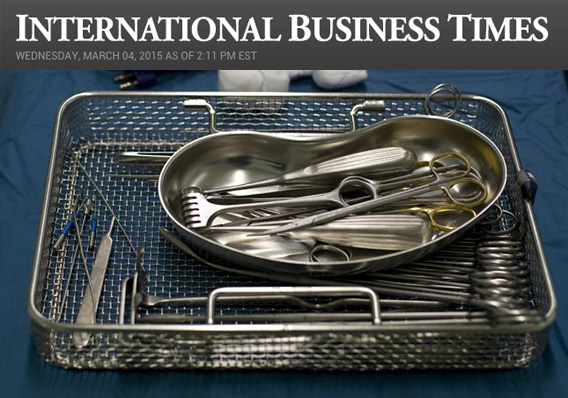 On the medical device known as an endoscope, a tiny camera sits at the end of a long black tube. In routine medical procedures like endoscopies and colonoscopies, the camera peeks into cavities in internal organs, checking for growths and spotting potential problems. But lately it’s the scope itself that seems to be the problem amid recent reports of germs getting stuck on them and transferring infections between patients.

The latest outbreak of CRE, or carbapenem-resistant Enterobacteriaceae, infections from not-fully-disinfected endoscopes in U.S. hospitals appears to be just the most recent instance of unclean medical instruments passing infections from one patient to another. Contaminated medical tools and lab equipment used to manufacture drugs have also been responsible in recent years for spreading infections such as hepatitis and meningitis. Endoscopes are complex medical instruments that are extremely difficult to clean and disinfect, but the growing numbers of outbreaks associated with dirty medical equipment has raised questions about the cleanliness of U.S. hospitals and the degree to which patients are at risk.

Health officials in North Carolina announced Monday that two residents had died from CRE in recent months and three had been infected with the highly resistant bacteria in Carolinas HealthCare System hospitals. Last week, at Ronald Reagan UCLA Medical Center in California, two patients passed away after being infected and 179 people may have been exposed to the bacteria after undergoing routine procedures with endoscopes.

“We now have the most stringent process for sterilizing scopes, which undergo gas sterilization with Ethylene oxide after the FDA recommended high level disinfection,” UCLA spokeswoman Dale Tate said in an email, adding that the hospital had “a robust infection prevention infrastructure that does ongoing surveillance looking for problems,” in order to reduce the possibility of more shared pathogens. Asked whether the hospital was concerned about a second outbreak of CRE, Tate said, “We are always vigilant, but not concerned since we believe we have an extremely safe process in place for sterilizing scopes.”

How widespread the problem is isn’t exactly clear, but recent high-profile cases have shined a light on the serious public health consequences of unclean medical instruments. “Filthy, dangerous medical implements have been showing up in hospitals and outpatient surgery centers with alarming regularity,” a 2012 report by the Center for Public Integrity found. From unclean arthroscopic shavers that shave off bone and tissue during surgery to reused single-use biopsy forceps, which help grab and hold objects, few medical devices and instruments seemed immune from the scourge of hair, tissue and other substances.

Contamination wasn’t confined to hospitals, either. In 2012, 64 people throughout the U.S. died in a fungal meningitis outbreak that struck 750 people. The patients had received steroids made in a contaminated lab with expired ingredients by pharmacists and others at the New England Compounding Center in Framingham, Massachusetts. In December, two company officials were charged with second-degree murder, among other crimes, for their role in the outbreak and could face life in prison if convicted.

The Food and Drug Administration, which approves scope manufacturers’ instructions on how to clean the instruments, said that it had first been alerted to the possibility of endoscopes’ transmission of drug-resistant bacteria in 2013. FDA spokeswoman Leslie Wooldridge said in an email that the FDA had “undertaken a comprehensive review of the best available information” that led the agency to believe the scopes design created “significant challenges” for cleaning and disinfecting. The FDA, she said, was trying to identify causes and create solutions that would prevent patients from being exposed to superbugs again through scopes. She pointed out that in over half a million procedures performed annually in the United States, “the risk of developing multidrug-resistant bacterial infections following ERCP [endoscopic retrograde cholangiopancreatography] is low, whereas patients may encounter serious health risks from not receiving necessary treatment.” ERCP procedures are used to examine bile ducts and diagnose and sometimes even treat problems.

Endoscopes, particularly the type used for used for ERCP procedures, are notoriously difficult to clean, even as far as medical instruments go. “Flexible endoscopes by the nature of their design are very challenging to clean,” Nancy Chobin, a registered nurse who has spent over 30 years working in sterile processing. The scopes are full of nooks and crannies where microorganisms can hide. But ERCP scopes, also known as duodenoscopes, in particular “have long been known to be an even greater challenge in cleaning,” because they contain a tiny channel with a tiny elevator for inserting a catheter. In other words, these scopes, which cost $35,000 to $40,000 each, have more and smaller parts.

“The most difficult piece is the manual cleaning, which is done right after the instrument has been used on a patient,” Dr. Pritish Tosh, an infectious diseases physician at the Mayo Clinic and a member of the Mayo Vaccine Research group, said. “That’s the Achilles heel of the whole thing.” If manual cleaning is not done properly and effectively, duodenoscopes cannot be fully disinfected in the next step of the cleaning and disinfecting process. It is this type of scope that has been named the culprit and vector for CRE infections following routine endoscopic procedures carried out at hospitals in California and Seattle this year and as far back as 2012.

CRE is not the only infection to have been shared in endoscopies. In one case in Florida, an Air Force veteran named Robert Metzler was awarded $1.25 million in damages after contracting Hepatisis C in 2009 because medical equipment used in a colonoscopy had not been fully sanitized. It turned out Metzler wasn’t the only one: at Veterans’ Affairs hospitals from 2002 to 2009, nearly 11,000 veterans had undergone colonoscopies that were carried out with equipment that had not been properly cleaned, an investigation ultimately found, with patients eventually testing positive for HIV, hepatitis B or hepatitis C.